For A Better Pilgrimage 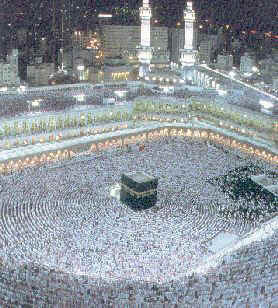 The Hajj went off without a stampede, proving that 3 million Muslims can commune with a rock in peace. There are often problems when the pilgrims pass three walls representing Satan that they pelt with pebbles.

Frankly, the whole thing looks like a mess to me. They would be better off selling it to Disney. They could separate the thing into two parks, Allahland and Satanland. Pilgrims would board cars outside the walls that would drive them through both lands. If there were 20 pilgrims per car and four cars at a time stopped at the rock for 10 seconds each, 80 pilgrims could have rock time every 10 seconds. That would make 480 pilgrims per minute, 28,800 pilgrims per hour. 3 million pilgrims could be safely processed through the ride in 90 hours.

After seeing the rock, the cars would enter Satanland, where each pilgrim would be given a pebble to throw at the wall as the car drives by. The ride would be financed by money from Saudis that had been intended to support terrorism.

If the Religion of Peace wants my help in entering the 21st century, I’m available.
Posted by Myrhaf at 12:32 PM