I gave my red Les Paul a workout with a Peavey amp (listening through headphones). Quite happy with the tone: clean but a little beefy. 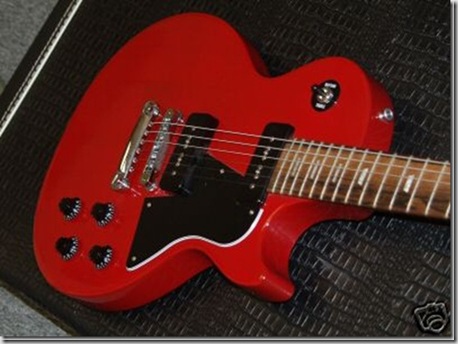 They can take away my freedom, but they can't touch my soul.

The two most remarkable stories of 2009 were Obama-Reid-Pelosi’s attempt to ram America into European-style socialism and the reaction to it among the people — the tea party movement. John Lewis argues that Obama’s ideological consistency has brought clarity to American politics, which is why the President’s policies created so strong a reaction in his first year of governance.

The Democrat push to expand big government is not surprising, but the reaction against it among the America people is surprising — I thought Americans had lost the capacity to oppose statism — and that reaction is as heartening as the Democrats’ actions are depressing. America is now thought to be turning to the right (HT: Instapundit). A Scott Rasmussen poll shows Americans to be deserting the Democrat Party.

The Democrat reaction to first the tea parties and then the town hall protesters was to smear those involved, calling them racists, Nazis, KKK and even “evil mongers.” Their reaction is stunning when you consider the numbers:

Only a fourth of all Americans approve of the direction Obama and Congress are taking the country, according to a Gallup survey. A similarly dismal proportion approve of the job being done by Congress under the leadership of Reid and Pelosi. Nearly three-fourths of those surveyed prefer that Congress do nothing to reform health care rather than take final action on either the Senate or House versions of Obamacare.

Action/reaction: the radicalization of the left has partly radicalized the right. Ayn Rand and Objectivism had increased visibility in 2009. Signs about John Galt showed up at tea parties. Atlas Shrugged sold more copies than ever before in its history, a publishing phenomenon for a 53-year old book despised by the cognoscenti of both the left and the right. And please note that although William F. Buckley pronounced Objectivism dead a quarter century ago, it is not God and Man at Yale that people are turning to as they resist the growth of big government.

Two other stories of surprising good news in 2009 were Climategate and the Iranian Revolution. The “science” of AGW is taking more and more criticism. A new study from the University of Bristol says the ratio of CO2 in the atmosphere has not increased in 150 years. Alexander Cockburn points to a piece by Gerhard Gerlich and Ralf Tscheuschner that argues the greenhouse effect violates the second law of thermodynamics.

…a cooler body cannot warm a hotter body without compensation. Greenhouse gases in the cold upper atmosphere cannot possibly transfer heat to the warmer earth, and in fact radiate their absorbed heat into outer space.

Whether these “deniers” are right or not, more and more voices are questioning the environmentalists’ vaunted “consensus.” Let the truth be heard!

In Iran the regime of the mullahs continues to kill protesters, even running them down with trucks, but the protests do not stop. The momentum seems to be with those who oppose theocracy. Obama’s response appeasing the dictatorship has been shameful.

One last bit of good news from 2009: Obama is reported to be tired. “Fundamentally transforming the United States of America” is hard work. It takes the energy and ruthless will of a Robespierre or a Lenin to do it right. Obama has too much Peter Keating in him to be the complete monster.

What does this mean for 2010? One can only guess, of course. Whatever happens, I believe we are at an important moment in history. The next few years could determine our course for the next generation.

The left is hard to predict because it has lost all confidence in reason and now believes only in force. That’s why their first response to opposition is always lies, smears and name-calling. I believe they will continue full steam ahead in the direction set in 2009. Their altruist-collectivist morality justifies (to them) any means to the end of state power over the individual.

I suspect that enormities are being perpetrated by the bureaucracies right now that we know nothing about because publicizing them is not in the interest of the leftist mainstream media. Obama might put more pressure on the bureaucracies to expand state power by fiat, growing like mushrooms in the dead of night. Let the House, Senate and President get all the media glare while the alphabet agencies destroy freedom in the shadows. The administration has already said that if cap and trade is not passed by the legislative branch, then the EPA will do it anyway by regulation. Will of the people? The Constitution? Please, we’re talking about power here. Get serious.

The biggest thorn in Obama-Reid-Pelosi’s craw is America’s freedom of speech. Since the totalitarian left has given up on reason, they have no confidence in arguments to counters arguments. Words are just the tools of force. You say what you need to say to gain power. As the left sees it, their every step toward socialist utopia is obstructed and delayed because the evil Rush Limbaugh agitates the people with his lies. If the left does something daring in the next few years, it might be in the area of restricting speech. It depends on what they think they can get away with. Keep a wary eye on this issue.

The right is at a crossroads. They can move in the direction of liberty and individual rights or they can stay with Bush’s compassionate conservatism. Between the religious right and the pragmatic moderates I have given up on the Republicans. I think they will be the undeserving beneficiaries of the people’s rage against expanding big government in November of 2010. After that they’ll probably blow it, as they always do.

I sense that the tea party movement has stiffened the GOP’s spine a little. If so, it means that the American sense of life might rescue America from socialism once again. This would be the best news of all, as I thought America had let it go since 1972. Could it be that the ideas of Ayn Rand are already spreading through our culture and affecting our politics?

I’ve already written this post twice because the first try was lost when my computer locked up. And it happened just as I was getting ready to click on “publish!” I regrouped after a few minutes and rewrote. As always writing gets better in rewriting.

Posted by Myrhaf at 3:20 PM 2 comments: Links to this post